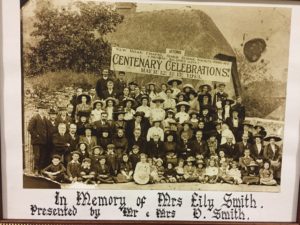 Littlemore Baptist Church dates back to the beginning of the nineteenth century. It was initially a school designed to help improve the conditions of poor children in Littlemore and the surrounding villages. The following overview was published by the Littlemore Local History Society in 2012. Its author is unknown.

The exact dates of the formation of the twelve Sunday Schools associated with the New Road Chapel Sunday School Society are not as ascertainable but as regards documentary evidence that at Littlemore has undoubted pre-eminence. As early as 1804 preaching had commenced in that village, and three years later a chapel was erected on a site purchased by Thomas Pascoe whose signature appears on the covenant of 1780. When the meeting house was built at Littlemore it was separately connected with the church at Oxford. The Pastor of one being the Minister of the other, both pulpits being equally his own.

In 1813 a few young men, convinced of the importance of educating the rising poor, and feeling particularly for the condition of the children in Littlemore and the surrounding villages, determined to make all prudent exertions to establish a Sabbath School at Littlemore. Permission was obtained to hold the school in the chapel and the teachers gained the sanction and support from many of the principal members of Mr Hinton’s congregation.

In the following year (1814) there was an average attendance of 34 scholars, which as the seventh quarterly report declares, was a fact in a country school held only on the Sabbath and where the majority of the children reside at such distance is, they are persuaded, not of frequent occurrence. In the following year the number of scholars and teachers had considerably increased, but reference is made to the fact that it was difficult to induce teachers to attend the Littlemore school, the majority being ‘always in the Oxford schools, which demands a sacrifice of public worship’. Allusion is made to a girl, who, during the last quarter of the year repeated 800 verses of the scripture, and, it is added, ‘the total extra lessons during the quarter is 4,632 verses of scripture, besides a few answers of scripture and 447 hymns’.

The report concludes, ‘they (the teachers) desire wisdom to estimate the proportion of personal benefit which is their duty to sacrifice to the public good and in our own experience they hope for the fulfilment of the promise, “he that watchers others shall be watched himself.”‘ The report is signed Jas Slater, Superintendent. Mr Slater who was a tailor and robe maker carried on business at 105 High Street.

From this date (1815) no reports are available, but there is reason to believe much good work was done. Among the teachers in the 30s was Mr (afterwards Dr) Edward Underhill who, relating his experiences at Littlemore, stated that when his father, Michael Underhill, made his first visit to Littlemore to teach in the Sunday School, he and the two young men who accompanied him were so impressed with the importance of the work, that on reaching Iffley Turn they went into a field and held a prayer meeting to implore God’s blessing on the work they were about to commence. About the year 1842 the state of affairs at Littlemore was so discouraging that the executors at New Road considered the propriety of empowering the trustees to sell the property, but happily the optimists prevailed and the good work was continued.

In 1864 the Chapel and School were renovated, Mr Robert Grubb became Superintendent, the teachers being Miss Morris (who subsequently became Mrs Robert Alden), Miss Anne and Elizabeth Roberts of Sandford, Messrs Ernest Ethelred, John Payne, and Joseph Ashley. Mr Grubb was Superintendent for 14 years and was succeeded by Mr Francis (Frank) who faithfully discharged for the long period of 31 years, retiring in 1909 when Mr E. E. Newell was elected. During the protracted period Mr Morton laboured at Littlemore, he had the advantage of the services of Mr Merriman as an assistant Superintendent, who had been associated with Littlemore School for nearly 40 years. When, in 1909 the Oxford and District Sunday School Union offered a challenge banner for the scholars scripture examination, the Littlemore School were successful competitors and won similar distinction on two occasions since, proving that the Littlemore children still retain the intellectual vigour referred to in the report for 1815.

The fact that Littlemore children were able to successfully compete with those who enjoyed the advantage of attending schools in Oxford is of great significance and fully attests the excellence of the tuition they had received. In 1890 a new classroom was added and 14 years later the Chapel was enlarged, both extensions being needed in consequence of the expansion of the school. Four of the teachers received the Sunday School Union diploma for long service: Mr Merriman – 35 years; Mr Martin – 42 years; Mr Herring – 31 years; Mr Clarke – 27 years.